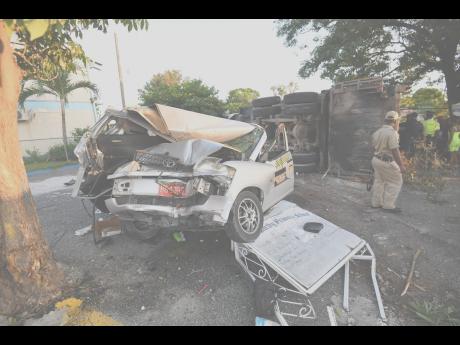 Photo shows the taxi that was crushed by the runaway truck (background) on October 28. The truck killed seven-year-old Benjamin Bair. The driver, Alten Brooks, has been charged with manslaughter.

Investigators assigned to the Kingston Eastern Police Division have charged the driver of the truck that claimed the life of seven-year-old Benjamin Bair on the grounds of the Clan Carthy Primary School on Deanery Road in Kingston 3 on Monday, October 28.

He is 52-year-old Alten Brooks of Nine Miles Bull Bay, St Andrew. He is scheduled to appear before the Kingston and St Andrew Parish Court on Friday, November 15.

Reports are that about 4:30 p.m., Benjamin was at school when the garbage truck that had been picking up trash on the school compound overturned on him.

He died on the spot. The driver of the truck fled the scene after. Following investigation,  Brooks was arrested.