BREAKING: Briana Williams reprimanded; will not be barred from competing 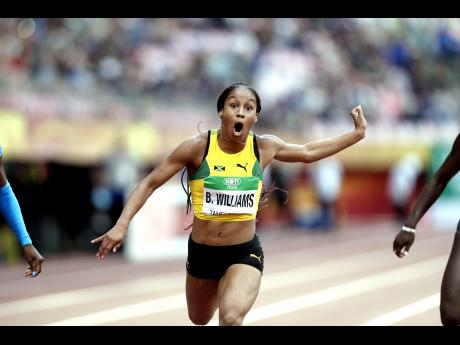 The Independent Anti-Doping Disciplinary Panel (IADP) has ruled that Jamaican sprinter Briana Williams be reprimanded with no period of ineligibility, after her two-day anti-doping hearing earlier this week.

The ruling means Williams is now free to join the rest of Jamaica's track and field team, which she was provisionally named a part of for the IAAF World Championships which start in Doha, Qatar on Friday.

Williams tested positive for the banned substance hydrochlorothiazide (HCTZ) and faced the IADP to determine whether she was at fault for it being found in her system. She had plead not guilty in the matter.

A statement released by the IADP on Thursday afternoon says, “The IADP is unanimously persuaded to the standard of proof on the evidence presented that the athlete, Miss Briana Williams, was in breach of article 2.1 of the 2015 Anti-Doping Rules as she had in her body a specified substance namely “HCTZ.”

“The IADP finds that the athlete has established no significant fault or negligence as she was given tablets by her guardian and had no intention to cheat in her In-Competition sprint event on June 21, 2019. The IADP was referred to article 10.5.1.1 of the Anti-Doping In Sport Rules and this is relied on in its findings.

“The IADP recommends that the athlete undergoes another education programme on Anti-Doping In Sports Rules as soon as JADCO carries out same.”

More on this story in THE WEEKEND STAR.