Xhaka ‘better in his mind’ ahead of Arsenal return – Emery 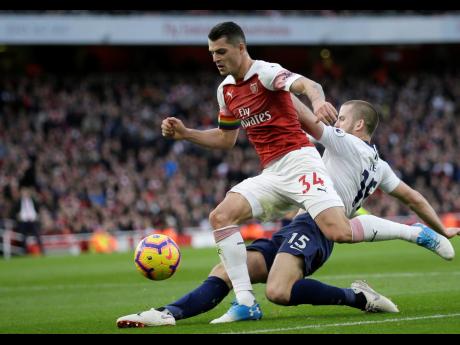 In this Sunday, December 2, 2018 file photo, Arsenal’s Granit Xhaka (left) fights for the ball with Tottenham’s Eric Dier during their English Premier League match at the Emirates Stadium in London.

Arsenal midfielder Granit Xhaka is in contention to play against Southampton this weekend after missing the last four games following his angry reaction to being jeered by the team's own fans, manager Unai Emery said yesterday.

Xhaka was stripped of the captaincy after swearing at heckling Arsenal supporters following his substitution in a 2-2 draw against Crystal Palace at Emirates Stadium on October 27, 2019. He has since missed English Premier League matches against Wolverhampton Wanderers and Leicester, as well as games in the League Cup and Europa League.

Xhaka has been on international duty with Switzerland over the past two weeks and Emery said the player "is coming back better in his mind" and "wants to come back with confidence (of) the supporters."

Asked whether Xhaka will play in the home match against Southampton in the league on Saturday, Emery said: "We are going to decide tomorrow but I want to do that comeback, give him confidence, and make him comfortable."

Xhaka has said ongoing social media abuse aimed at his family was one of the reasons behind his furious reaction to fans in the game against Palace.

Arsenal have offered counselling and other support to Xhaka privately.